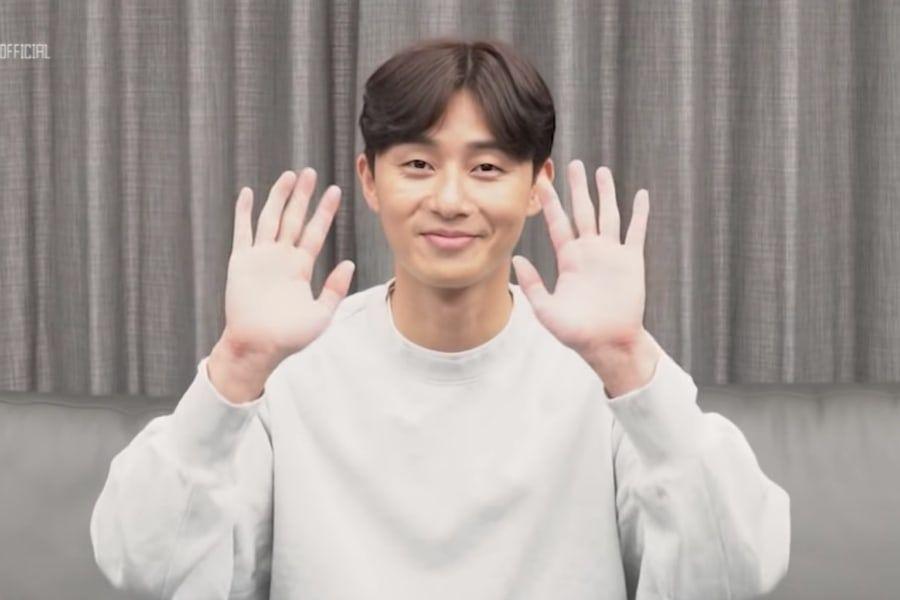 Park Seo Joon has chosen a cute nickname for his fans!

On January 25, Park Seo Joon uploaded a video on his YouTube channel titled “Find the real fandom nickname.” In the video, Park Seo Joon was told that they’ve been flooded with requests for Park Seo Joon to pick an official fan nickname.

He read out from a list submitted by fans, explaining that he wanted to find a fun one. Some options included Assist, Joon Ba (Korean abbreviation for “Look only at Park Seo Joon”), Doctor, Box, Officer, Seo Tap (A mix of Seo Joon, staff, and step), Darling, and more. One fan suggested Director and Park Seo Joon jokingly responded, “If we do director, that might be kind of hard for me. Do you by chance want to social distance?”

After reading out many other options, Park Seo Joon circled back to an earlier suggestion of “Jeomju” (store keeper) and shared, “I think it has a good feel to it.” Park Seo Joon’s official fan cafe is titled “PARK’s Office” (박스오피스), and the fan who sent in the suggestion of “Jeomju” used the fact that the name also sounds like “box office.” Park Seo Joon read out the meaning, which said, “The name suggests that all fans play big roles as we each represent our own branches somewhere.”

Park Seo Joon settled on Jeomju and commented, “My Jeomju, thank you. Thank you for your many suggestions. In the future, I will continue working hard to become an actor with a positive influence on society so I can look good for my Jeomju.”

He added, “Those who have recently begun supporting me and those who have supported me since my debut are all precious to me. In order to continuously show a good and maturing image to these people, I’ve decided on the fan nickname Jeomju, so I will become a Park Seo Joon who works his hardest. Lastly, thank you again for sending so many suggestions.” He ended the video by saying, “Everyone, stay healthy and stay strong!”

Watch the full clip with English subtitles below!

Check out Park Seo Joon in “What’s Wrong With Secretary Kim” below!