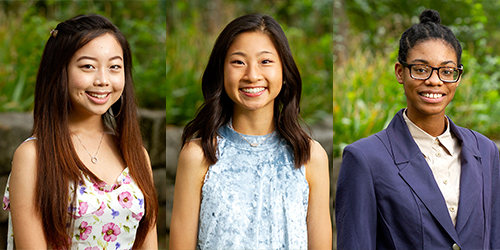 Each year, self-identifying women, genderqueer, and non-binary U.S. high school students are eligible to receive recognition for aptitude and aspirations in technology and computing, as demonstrated by computing experience, computing-related activities, leadership experience, tenacity in the face of barriers to access, and plans for post-secondary education. This year, 40 winners and 360 honorable mentions were selected from 4,288 applicants.

Ryumae has worked the past four semesters with Dr. Uta Ziegler in Western Kentucky University’s (WKU) School of Engineering and Applied Sciences using the Monte Carlo Tree Search artificial intelligence algorithm for the game Dots & Boxes. She has not committed to a college yet, but plans to major in Computer Science.

“As someone passionate about empowering females in STEM, being a part of NCWIT has allowed me to become part of a national community leading the movement towards closing the gender gap in technology,” Ryumae said. “Being a part of the program has encouraged me to pursue Computer Science in college and a career in software development.”

Huang has pursued mathematical modeling research with Dr. Richard Schugart of WKU Mathematics. Her research aims to find the most influential factors in the healing process of diabetic foot ulcers to help healthcare professionals create effective treatment plans to combat unpredictable chronic wounds. She plans to study Computer Science and Finance/Entrepreneurship and then work as a venture capitalist or entrepreneurial engineer. Huang aspires to eventually earn the MBA and start her own company.

“I am honored to win this award and become part of a group of talented and ambitious women in STEM. I am constantly inspired by my generation who strives to positively impact our world through technology,” Huang said. “I plan to continue inspiring young women in computer science to speak up and pursue their dreams.”

Hunter-Hays made her impact teaching at the Girls Who Code Chapter in Bowling Green, creating STEM opportunities for girls in grades 3 – 6. Her college plans include majoring in computer engineering and researching in robotics or microelectromechanical systems.

“Growing up I did not have many STEM-based opportunities, so I wanted to make STEM more accessible to others like myself. I dream of using both my engineering and language skills to make a Chinese branch for NCWIT,” Hunter-Hays said. “I currently teach young girls to code in hopes they may one day pay it forward.”

About NCWIT: NCWIT is a non-profit community that convenes, equips, and unites more than 1,100 change leader organizations to increase the influence and meaningful participation of girls and women from every community — at the intersections of race, ethnicity, class, age, sexual orientation, and disability status — in the influential field of computing, particularly in terms of innovation and development.