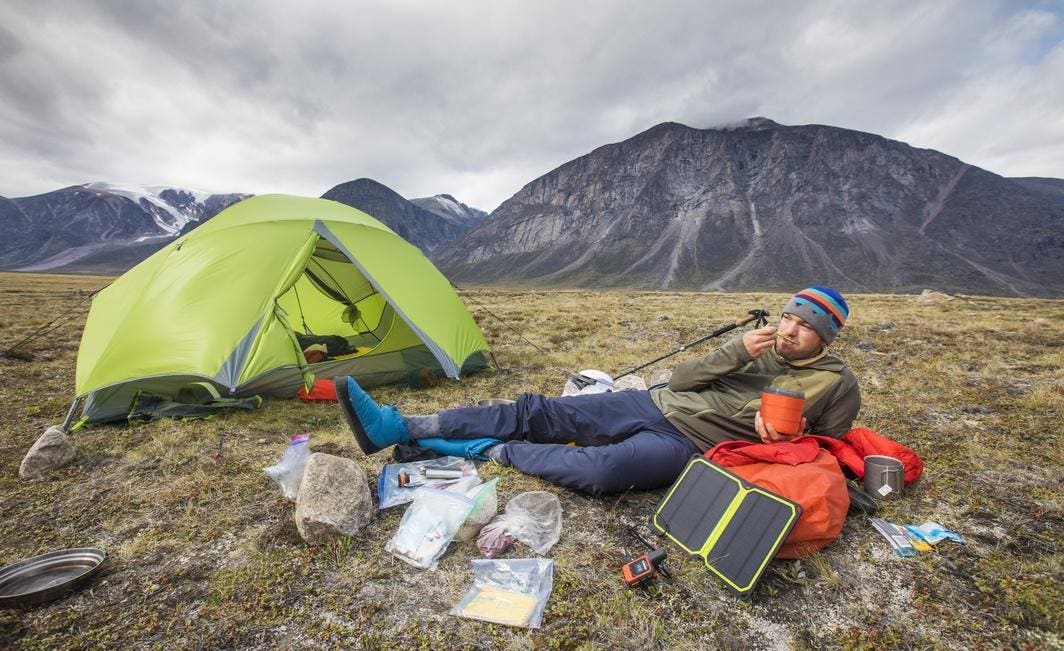 Solar chargers have come a long way in the last few years. Once little more than a novelty, the best solar chargers can now recharge your phone in an afternoon—not as fast as an AC adapter, but certainly good enough for outdoor activities like hikes and camping trips, or just charging your mobile gear near a window rather than adding to your electric bill.

They’re not only good for your phone. Typically equipped with one or two USB ports, you can use a solar charger to fuel up a power bank so you can draw that power after the sun goes down. Or you can plug in any of your other USB-equipped gear, like GPS, tablets, flashlights and more.

If portability is a priority, keep an eye out for size and weight. If the solar panels unfurl, be sure that you can live with its total size. You might want to clip it to your backpack for a day hike, for example, and a charger that unfolds to be four feet long is probably too much to manage, but a two-foot panel might be ideal. And the charger’s wattage is the most important spec to look for—the higher the wattage, the faster it’ll charge your gear or fill a battery. Here are the 7 best solar phone chargers you can buy today.

The higher the wattage a solar charger can supply, the faster it’s able to charge a device. BigBlue’s 28 watts offers the best price-performance ratio of any consumer solar charger we’ve seen. Yes, there are chargers which offer more than 28 watts of power—the Goal Zero Nomad 50, also on this list, delivers 50 watts for example. But it’s significantly more expensive.

BigBlue’s 28 watts makes it practical to charge a phone in just a couple of hours—provided you have a bright, unobstructed sky and somewhere to spread out the charger for optimal coverage. And BigBlue does take up a lot of space, unfolding into four solar panels that are nearly three feet long. Grommets let you also hang it from a tree or even clip it to your backpack as you hike.

BigBlue doesn’t have a built-in battery, but it does have three USB ports (two 2.4-amp and one 1-amp port) for connecting up to three devices at once—it’s one of the few chargers we’ve seen that can accommodate more than two devices. It’s made of a rugged polymer fabric, is IPX4 waterproof and folds up to just 11×6 inches for easy storage in a backpack.

Anker’s 21-watt portable solar charger looks like BigBlue’s younger sibling; it’s made of the same industrial-strength polymer fabric, has the same sort of grommets for hanging it from your backpack, and folds up to the same 11×6-inches for travel and storage. But it opens up with just three panels, which means it’s a more compact 26 inches long (and delivers a somewhat more modest 21 watts of charging power). It also features two USB charging ports, not three, but that’s not much of a trade-off, since the third 1-amp port on the BigBlue is of limited utility anyway.

But Anker usually sells this solar charger for about $30 less than BigBlue, which makes it a solid value. And the smaller size makes it a great choice, especially since the performance is similar.

The BioLite SolarPanel 5+ has its own kickstand for orienting it on the ground for charging, and you can also use the kickstand to hang it if needed. But what’s remarkable about the BioLite’s design—and unique among consumer solar chargers—is the small sundial that you can use to find the optimal angle for soaking up sunrays. The dirty little secret is that the angle of the panel can make a big difference in how much energy you accumulate, and all solar chargers should have a widget like BioLite’s sundial to help you zero in on the right angle.

There’s also a 2,200-mAh battery built in so the solar array can be storing electricity even when there’s no gadget plugged in. Want to charge devices directly? There’s a USB port to connect your phone or other device. You only get 5 watts of charging power, though, which is just a fraction of what you get with a model like BigBlue. That said, you can step up to BioLite’s 10-watt solar charger, which includes a fold-out second solar panel and a larger 3,000-mAh battery.

Blavor’s Solar Power Bank does a little bit of everything, and does so at a very attractive price. Let’s be clear, though: The solar cells on the top of this power bank aren’t large or efficient enough to charge your phone in an afternoon. The emphasis here is on the power bank—a beefy 10,000-mAh battery. The solar charging is supplemental at best; Blavor doesn’t even indicate its wattage, so consider it a fallback if you have no other option. That said, given enough time (several days) it will charge the integrated battery or your mobile devices.

That means this gadget works best if you head into your outdoor adventure with a fully charged battery. Not only does it have two USB ports (one USB-A and a USB-C), but it has Qi wireless charging as well. It’s waterproof with an IPX4 rating and and includes dual flashlights for a very bright beam. It would be great if the solar charging were more effective, but the device would also probably be more expensive. As it is, it’s a great exercise in getting a lot on a small budget.

This three-panel solar charger is rugged, weatherproof and highly portable. It folds up to just 10.5×6.5 inches and is only an inch thick, yet unfurls to deliver a reasonable 15 watts of power. When unfolded, it’s still fairly compact at 20×10 inches. It clips easily to your backpack so you can let it soak in sunlight while hiking. It should stand up to a significant amount of outdoor abuse; it’s covered in ETFE, a fluorine-based plastic which offers more durability than many other materials, and it’s waterproof so it’ll survive being left out in the rain (though don’t expect to get any charge during the rainstorm).

Unlike models like BigBlue, you don’t need to add a battery to capture the sunlight—it includes a 10,000-mAh power bank, so you can top that off or use the USB-C and USB-A QuickC Charge 3.0 ports to directly power your devices.

Goal Zero’s Nomad 50 is among the largest portable solar chargers you’ll encounter. It weighs just shy of 7 pounds and is bulky even when folded up—11x17x2.5 inches. Open it uo to expose all four solar panels, though, and it’s 17×53 inches, which is about 4.5 feet long. The bottom line is that this is only barely portable and won’t make a good traveling companion for hiking or anytime you need to move around a lot.

But if you’re camping or otherwise have an established base somewhere, few portable chargers will generate more power or charge your devices as quickly. You get a massive 50 watts of power, which, under good lighting conditions, can charge a high-capacity 20,000-mAh power bank in as little as 3-5 hours. Few other solar chargers can make that claim.

You only get a single USB port and it’s a solar charger only—it doesn’t have a battery built in. That means you won’t be able to service multiple gadgets at once using it all on its own, but the best way to use the Nomad is to plug it into a power bank and then connect any devices you need to charge to that. And used that way, it’s a great alternative to hauling around a portable generator.

Don’t need this much power? Goal Zero sells a number of similar solar chargers, including a 2-panel 10-watt and 3-panel 20-watt model.

You’ll always have access to a working flashlight with the Renogy E.Lumen. This high-tech flashlight has a built-in 2,600-mAh battery that powers the LED bulbs and can also be used to charge or run your mobile devices via the USB port in the flashlight’s tail. The upshot is that you get a small power bank that’s solar rechargeable—though with a small set of cells on the side panel of the flashlight, it won’t charge quickly.

The flashlight outputs 500 lumen, but you’ll also find LED lights on that side that you can turn on in a variety of floodlight and strobe modes. With both white and red lighting for those functions, Renogy clearly envisions this as a flashlight you’ll tend to keep in your car. It has a small pointed hammer built into the end which can be used to shatter your window in an emergency, and there’s an integrated seat belt cutter as well.