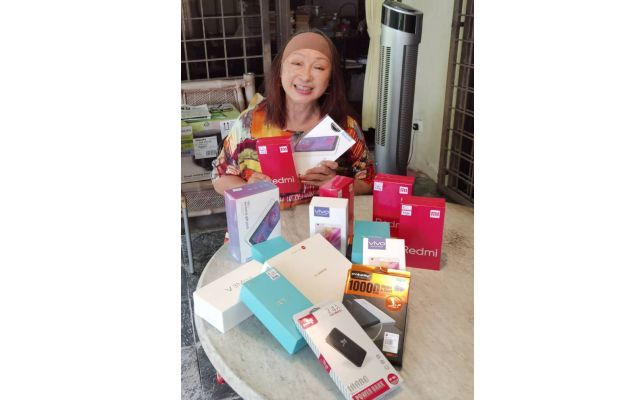 KOTA KINABALU: A social worker’s plea for gadget donations, be it used or new, to help poor children in their online classes in Sabah is taking off at an unexpected speed.

Rebecca Chin Fong Lai (pic) said she has been receiving calls non-stop over the past few days after she posted the plea for help on the “Beli Nothing Group Kota Kinabalu” Facebook page.

“I did not expect to get so much attention or calls from people telling me that they want to donate to this cause, ” she said when contacted Saturday (Jan 30).

She said she received calls and texts from people all over the country and some even from Singapore after her story was published in the newspaper a few days ago.

Chin said the love shown by these strangers and her friends were overwhelming.

“People just call and say ‘hi, I want to donate some used phones or some money for this cause’, without any further questions asked, ” she said.

She said for those who could physically send the items to her, they did while those with logistics problems would bank in some cash for her to buy the gadgets.

All these, Chin said, shows how much the pandemic has changed people’s perspective of life and how material goods do not matter as much.

So far, Chin said she has managed to accumulate dozens of handphones and some funds to buy new laptops for students.

“We’ll collect some more first, and maybe within these two weeks, if there are no hiccups, we can start sending the gadgets to those we’ve identified who need them the most first, ” Chin said.

She is also working with friends and local leaders, as well as those involved in charity and other groundwork, to get the data needed for this project.