Skip to content
Home » Oakland made gains in closing the digital divide during COVID. The classroom tech could be here to stay 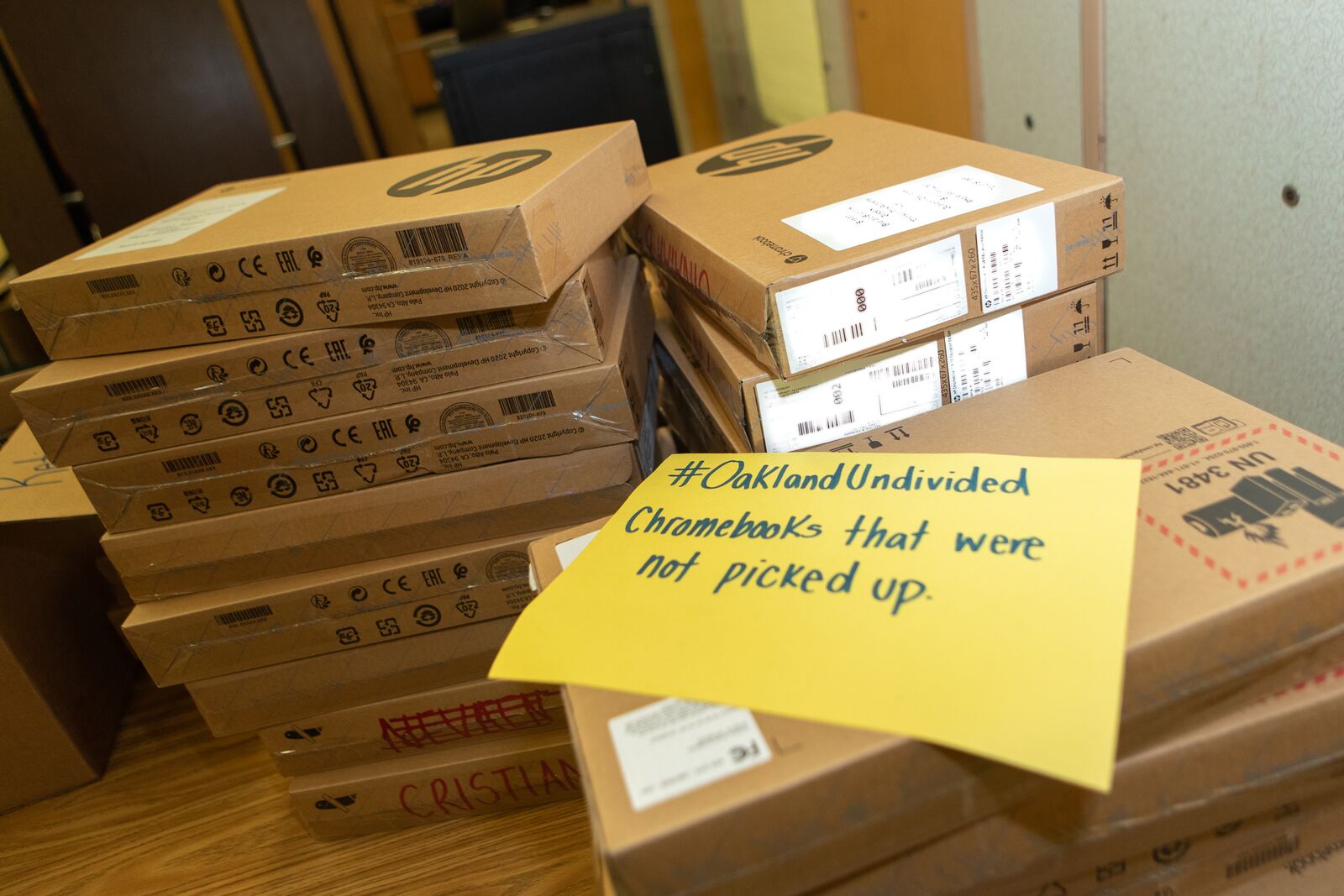 More than a year ago, the city of Oakland together with Oakland Unified School District and a group of nonprofit partners launched the Oakland Undivided campaign with an ambitious goal: to close the digital divide by raising enough money to purchase laptops and internet hotspots for every student in Oakland who needed them during the pandemic. At the time, public school students were required to learn from home virtually, but roughly 25,000 of them in Oakland lacked a computer, reliable internet, or both.

As schools loaned out their own stocks of aging Chromebooks while awaiting the new Oakland Undivided devices, teachers and other school leaders quickly realized that closing the digital divide required more than just handing out laptops and hotspots. Learning had gone completely online, but so had the way schools communicate with families, said Jaymie Lollie, the community schools manager at Frick United Academy of Language.

“Families went from an experience where, at pick-up, we were giving them a flyer or we’re having a conversation with you, to everything being an online type of communication,” Lollie said. “That was a huge shift for our parents.”

“My biggest fear is that people get excited and celebratory, and not realize that you have to continue to work collectively to solve deep, systemic inequity,” said OUSD Superintendent Kyla Johnson-Trammell at an Oakland Undivided celebration earlier this month. “This is a great first step, but we have a lot more to do.”

That work includes maintaining the district’s inventory of laptops and making sure all schools have enough on hand for each student. This summer, OUSD launched an internship program for high schoolers to get experience repairing computers as they refurbish the school district’s fleet of Chromebooks. It also means continuing to provide tech support for families regardless of their familiarity with technology.

Prior to the pandemic, many families at Frick United primarily accessed the internet using a mobile phone, and those that had a tablet or computer were the exception, Lollie said. As families received their Chromebooks, Frick’s assistant principal would walk them through the set-up process, bookmarking websites, logging into Gmail, and other basic functions. The school also conducted more than 600 home visits during the year, many of which involved dropping off laptops and demonstrating how to use them, Lollie said. While their support during the school year was focused on helping students complete their class assignments, Lollie added that future sessions could center on how the entire family can benefit from technology.

“The continued need for access to Chromebooks and Wi-Fi doesn’t go away because learning is happening in person,” Lollie said. “For students, the ability to continue their studies, do homework, or just exploring, may have stopped the moment they left our walls and now it doesn’t have to stop. Now they have access whenever they need it.”

The Oakland Reach, a parent advocacy group involved with the Oakland Undivided campaign, has been working with Sydewayz Cafe, an information technology business in Oakland, to provide tech support for the organization’s virtual family hub during the pandemic. In the fall, The Oakland Reach plans to launch a fellowship to give students and their families more intensive training in technology and digital platforms, said executive director Lakisha Young. They’ve also been helping families get a federal discount on broadband service.

As a partner with Oakland Undivided, the group will be involved in discussions about expanding broadband Wi-Fi access to Oakland families. Hotspots, which can be limited by data caps and slower speeds, were a quick solution to bridging the digital divide at the start of the pandemic, but they’re not a long-term fix, Young said.

“Hotspots are not connectivity, they’re back-up connectivity. If we’re going to set folks up, they have to have broadband,” she said. “Without that, there will keep being a deficit around technology.”

Late last year, the city of Oakland established OakWiFi to provide free Wi-Fi access to people who don’t have internet access in their homes. It initially rolled out in downtown and West Oakland, and early this year spread from East Oakland to the San Leandro border along International Boulevard. The service relies on fiber optic cables that run along AC Transit’s bus rapid transit line.

OakWiFi coverage can extend up to 1,200 feet from its base, which means that it doesn’t reach many neighborhoods in Oakland. The next phases of OakWiFi will consider creating mesh networks—wireless nodes that communicate with each other—at city and school facilities to extend the Wi-Fi signal, said District 6 Councilmember Loren Taylor.

“We want to get beyond having individual hotspots for individual people and be able to just have a citywide broadband connectivity,” Taylor said. “So wherever you are in the city of Oakland, you can be connected, completely leveling the playing field.”

As families prepare to start school next month, Young, the executive director of The Oakland Reach, wants to make sure that families who continue remote learning will be supported. At the end of June, the organization polled its families and found that 34{32cab40226fb9659b52e7925d8240640c7cae90b58a254f5ffce23f5dca80369} were undecided about whether they were returning to in-person learning in the fall. Oakland Unified, like other school districts in California, will offer a remote independent study option for the upcoming school year.

“Not every kid is going back to traditional schooling,” she said. “For parents and students who have decided to stay online, we should be prioritizing them because that will be the primary way they get their education.”

Using technology in the classroom

For David Byrd, a music teacher at Oakland High School, teaching online during the pandemic has meant focusing more on one-on-one lessons rather than having the entire class play at the same time. Differences in internet speed caused class playing sessions to quickly be thrown off because of lags and Zoom glitches.

“I haven’t heard my whole orchestra play together since before the lockdown,” said Byrd, who has been at Oakland High since 2013. “It was basically impossible to do ensembles for the last year and a half. We had to change the way we teach into more of a one-on-one kind of model.”

Despite the difficulties, Byrd has relied on the internet more for teaching music theory, and plans to continue doing so in the future. He and his students have also been experimenting with recording music at home and sharing it on DropBox. Last summer, through a partnership with Arts for Oakland Kids, each of the students in Byrd’s jazz band received recording equipment, including an audio interface, a microphone, headphones, and a download of PreSonous audio software to keep. Byrd’s jazz students will continue to use the equipment to record themselves playing music to share with him.

Tina Hernandez, the chief academic officer for Lighthouse Community Public Schools, which operates two schools in East Oakland, said that Oakland Undivided has given parents an opportunity to be more involved in their children’s education, since they can now log into the online learning platforms themselves and see their student’s tasks. The pandemic also forced the schools to re-evaluate the way they screen for learning disabilities. Over the past year, Lighthouse has worked with the NAACP to use software to conduct virtual screenings for dyslexia virtually, instead of having students sit side-by-side with an adult, they way they traditionally did it, Hernandez said.

“I don’t know if we would have discovered that before, or even been excited about it before, because we want to sit with every kid and figure out what they know. So we found ways to do that online,” she added.

At Bay Area Technology School, where prior to the pandemic, students already used digital learning software like iReady in class to complement their teachers’ instruction, Oakland Undivided provided laptops for students to take home, allowing them to keep up with their studies online. The flexibility afforded by distance learning also resulted in greater student participation. The East Oakland school had an average daily attendance rate of 95{32cab40226fb9659b52e7925d8240640c7cae90b58a254f5ffce23f5dca80369} this year, which superintendent Seth Feldman owed to the distance learning schedule.

For example, if a student missed the bus to school prior to school closures, they could miss an entire day of school, whereas with distance learning, if a student had a setback in the morning, they could still log in from wherever they were, Feldman added.

While school leaders would like to continue to offer a hybrid mode of instruction, the charter school may not be able to because BayTech’s charter doesn’t include hybrid instruction. In order to amend the charter, the school would have to go before the OUSD board of education and get it approved, which wouldn’t be possible before school starts. The decision would also likely be affected by board politics around charter schools.

“This should be the new model of education,” Feldman said. “Although we’ve learned a lot and groups of kids have done better, we may have to drop some of this.”

Young, the executive director of The Oakland Reach, echoed Feldman’s sentiments about not returning to the same style of education that schools had before COVID. Particularly in light of rising cases of the Delta variant of COVID-19, Young emphasized that the pandemic isn’t over yet, and technology use should continue to be expanded and supported in schools.

“There could be a world where school gets shut down again in some way, shape or form,” she said. “(Technology) is an important way to build infrastructure and invest in the people, and build the strength of the city. Now that we’ve learned it was such a big gap for us, and we’ve made a lot of headway with it, this isn’t the time to ramp down, this is the time to ramp up.”