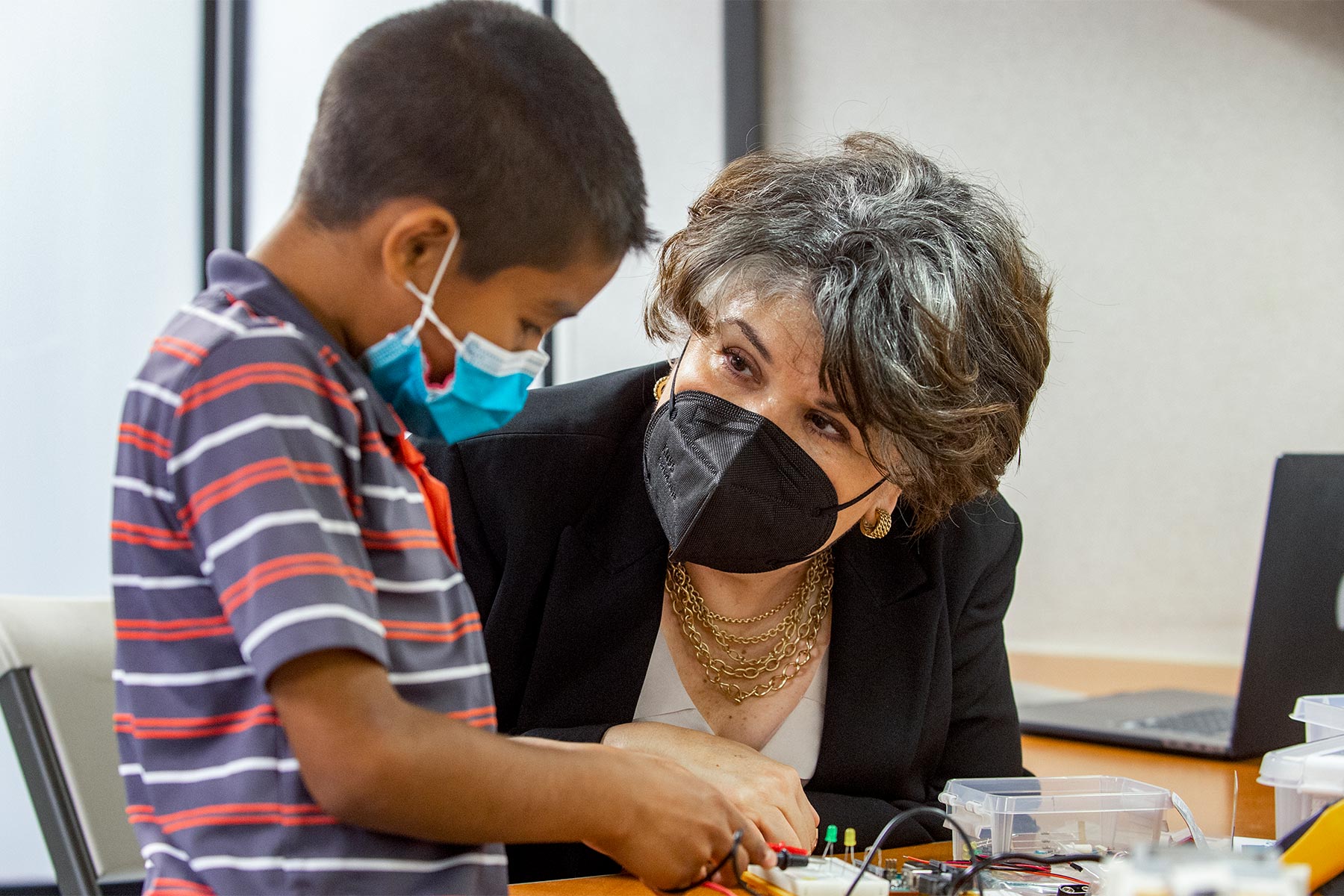 When Martha Escutia started worrying about the digital divide in the 1990s, almost nobody knew what that term meant.

“I was digging through the newspaper classifieds, the want ads,” remembered Escutia, USC’s vice president for state government relations and special counsel. “I noticed it was getting thin, and that got me thinking: Where is this information going? It was going online.”

High-speed internet was not a novelty, she thought; it was a necessity. Amid a wave of telecom mergers in 2005, Escutia saw an opportunity.

“I said: ‘Let’s make it a condition of these mergers that these companies have to set aside some money to bridge the digital divide.’ I was trying to protect poor people. Those were my conditions,” said Escutia, who was then chairing the Senate Committee on Energy and Commerce.

Behind those encouraging numbers, though, are fissures that became manifest when COVID-19 hit and students shifted to distance learning. Many California students this school year have lacked computers or Wi-Fi, with 10{a7758c3706987b952e6c06b8e84de22b0478c6ec9e4b4c13f69a9ea693861278} being limited to mobile phones — devices that aren’t up to the tasks of online learning and telehealth.

“This pandemic showed people how distance learning is not possible, telehealth is not possible, without broadband and access to devices,” said Escutia, who has been a CETF board member since the organization’s founding. “You can’t let that go to waste. Don’t waste a pandemic!”

Escutia overcame divides of a different kind in the 1970s. Her family’s home in East Los Angeles was about 10 miles from USC’s main campus. Like many other USC students back then, she relied on the bus to complete the two-hour journey. Upon arrival, she’d find herself worlds away.

“It was not as diverse as it is now,” she said. “I was reading Voltaire aloud in class, and a student made a comment that I sounded more Mexican than French. There were other experiences, too, like the time a sorority girl invited me to visit. I walked in and felt like I was in a museum. There were fresh flowers. I couldn’t believe people lived that way. We became friends, and I stayed in touch with her even after I went to Georgetown Law. But we had very different experiences.”

Her experiences shaped her mission in the legislature. Her legislative victories included affordable auto insurance for low-income drivers, limits on junk food in school cafeterias and a state-mandated study examining air pollution’s impact on children’s health.

Earlier this month, Escutia stopped by Liberty Plaza in Whittier, Calif., to visit one of her biggest achievements: a sky blue, 39-foot, 11-ton mobile technology center. It pulls triple duty as a center for health education, job training and digital literacy.

“When I grew up, we had bookmobiles,” Escutia said. “I wanted a 21st-century version of that, with computer stations that are accessible to anybody.”

Built on a motorhome chassis, the mobile lab and school has logged about 30,000 miles over the past decade, mainly in L.A. County’s southeastern cities like Bell Gardens, Cudahy and Huntington Park.

“Families here are affected by the digital divide,” she said. “It’s not just about the kids. We’re also trying to teach parents the value of a computer, and we’re thinking about seniors who need access to telehealth. We can bring that access, that experience, that education, right to them.”

USC to lead study on internet access in California

Later this month, the California Emerging Technology Fund will complete its 11th statewide connectivity survey. Prior surveys were conducted by researchers at the University of California, Berkeley, but for the first time, USC is leading the study.

“I’m glad USC has decided to really get involved in this issue of the digital divide,” Escutia said. “People don’t deny that broadband is vital, that technology is vital. What it comes down to, though, is access and affordability.”

Independently, Escutia is calling for a $500 million investment in networks for low-income urban and rural areas to be funded by a telecommunications surcharge. She also wants to cut the regulatory red tape that hinders upgrade network connections for hospitals, schools, universities and assisted living facilities — resources she calls “lifelines in a time of crisis.” Escutia aims to expand access to affordable high-speed internet service and a “dig once” policy for laying down fiberoptic cable during road construction projects. Finally, she supports a thorough inventory of computing devices and connectivity to help the state identify and bridge gaps in education and telehealth.

“California is a state of great wealth and great poverty, and it is the cradle of technology,” she said. “It is frankly rather shameful that we have a digital divide here, but we still can overcome it.”