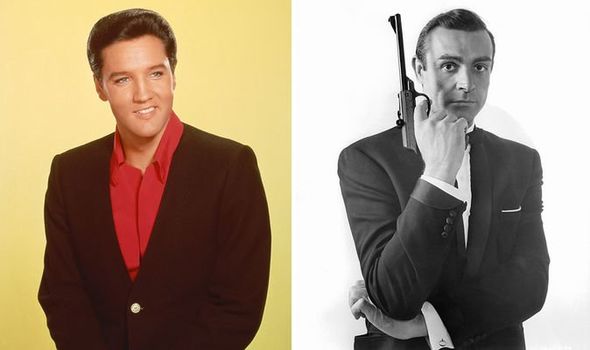 Elvis Presley loved the gadgets of his day and would buy the latest technology with his vast wealth. The King even owned one of the first mobile phones and it turns out this purchase was inspired by Sean Connery’s James Bond. The reveal was made by Graceland archivist Angie Marchese in a recent virtual live tour of the star’s Memphis mansion.

While showing fans around Graceland’s Jungle Room via live stream, Angie had brought out Elvis Presley’s mobile phone in a big black case

She said: “This is one of my favourite pieces in the collection.

“[Back in 1963], Elvis goes to the movies and sees James Bond’s From Russia with Love.

“And in the very beginning of the film, James Bond…goes and takes a phone call at his car.”

Bond fans will remember Connery’s 007 had been relaxing by the water with a woman before answering an early car phone in his Bentley.

Angie continued: “Priscilla tells the story that Elvis becomes obsessed with finding a car phone [after seeing the Bond movie].

Opening up the briefcase containing the early car phone, she showed that the top half of the inside had a piece of paper taped to it featuring The King’s very own handwriting.

Elvis’ personal instructions on how to use the car phone read: “Use channel YS or JL.

“Ask for mobile operator then give her your number which is YJ79896, Then the number you are trying to reach.”

Interestingly, the device didn’t have regular push buttons but a rotary dial as early landlines would have.

On Elvis’ early mobile phone, Angie said: “At the time they were very rare.”

The Graceland archivist added: “They came out in the seventies but they were very rare at the time.

“So Elvis was kind of in a league of his own when these came out.”

She then pointed out how we all have these in our pockets today, adding: “Can you imagine what Elvis would do with modern-day technology?

“I mean if this is what he did then, can you imagine what he’d do now?”

This September sees the release of the 25th James Bond movie in No Time To Die.

While the Elvis biopic movie directed by Baz Luhrmann arrives in cinemas in June 2022.

Once Upon A Time In Hollywood’s Austin Butler is playing The King opposite Tom Hanks as manager Colonel Tom Parker.

The movie has been shooting in Australia where Graceland has been recreated on set with the help of the actual Memphis mansion, who have shared images and measurements with the production to ensure accuracy.