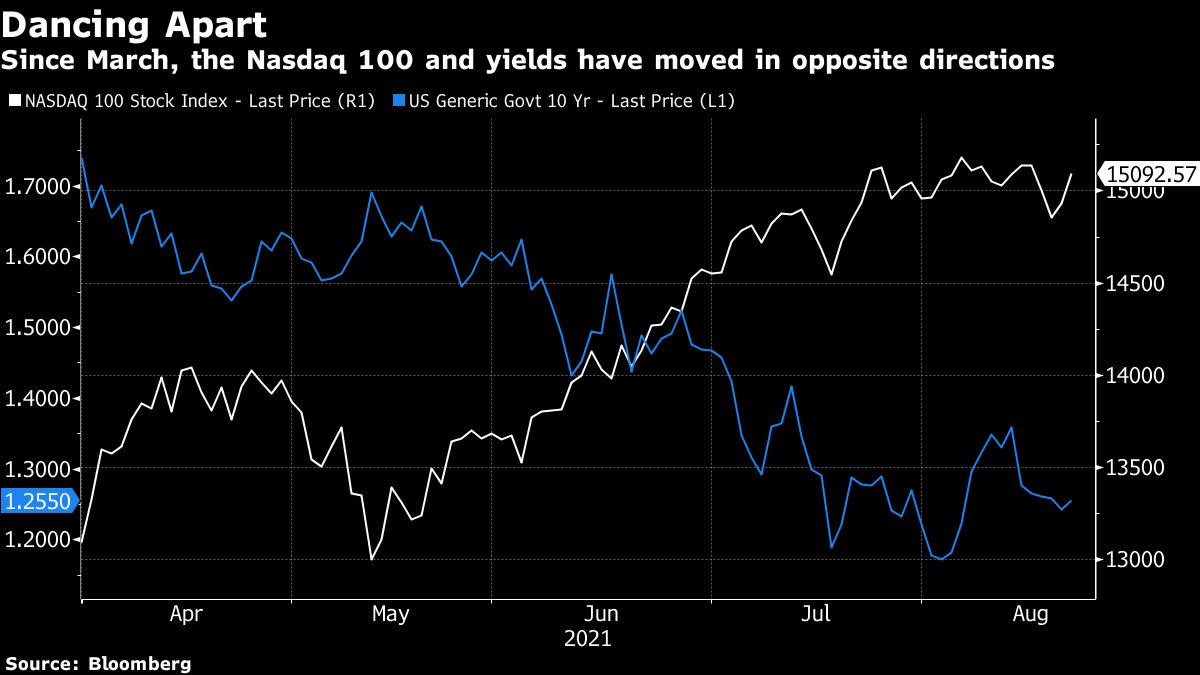 (Bloomberg) — Want to know where the world’s biggest technology stocks are heading? Just watch one of the oldest measures there is: the bond market.

That’s increasingly the refrain from some investors after a season of surging corporate earnings did relatively little to push the likes of Apple Inc., Facebook Inc. and Netflix Inc. much further ahead.

There are few major catalysts seen on the immediate horizon to elevate the already record-setting stock prices of the U.S.’s technology giants, with the surging Delta variant dominating the outlook for everything from commodities to emerging market bonds.

So a coterie of Wall Street analysts and investors are turning to Treasury yields for clues.

Those yields may be used in mathematical models to discount into today’s dollars the value of earnings companies won’t see for years. The higher those yields go, the smaller the present value of those profits may become.

While that affects all companies, it’s especially significant for fast-growing businesses whose stock prices are more dependent on the large earnings they’re expected to reap far in the future. The shares of such companies got an added boost following the onset of the pandemic as the Federal Reserve’s effort to head off an economic collapse sent Treasury yields tumbling, making those future profits look even more attractive.

“If rates go up, they will underperform,” Aash Shah, senior portfolio manager with Summit Global Investments, said of the biggest tech stocks. “That’s nothing against their business, just a reality of discounted cash flow.”

The interplay between technology stocks and Treasury rates is nothing new, of course; the rise in yields over 2018 contributed to an outsize rout in the Nasdaq 100 Index late that year, for example. And other forces, like last year’s shift away from companies hard hit by lockdowns, have also played a major role in driving tech stocks.

Chris Murphy, co-head of derivatives strategy at Susquehanna International, said a rise in yields doesn’t necessarily pose a risk to tech stocks if economic growth stays strong. But that could be eclipsed if investors grow fearful about the expected pullback in the Federal Reserve’s bond buying program.

“If economic growth holds up, 10-year yields and the Nasdaq can rally together,” he said. “If the focus switches to the Fed tapering, then that’ll be bad for the Nasdaq and the relationship starts to become more negative.”

Fed Chair Jerome Powell is expected to remain vague about the timing of the central bank’s tapering of asset purchases during the annual Jackson Hole economic symposium later this week.

Excluding Amazon.com Inc., the so-called Faamg stocks have gained even more. Google-parent Alphabet Inc. is up 37% over the same span. Microsoft Corp. has advanced 28%, while Apple Inc. and Facebook have both gained more than 20%.

Citigroup Inc. strategists who expect the 10-year yield to climb toward 2% as the market heads into 2022 recommended this month that investors reduce exposure to tech stocks due to the risk of higher interest rates.

At the same time, the sector’s earnings growth is expected to shrink in coming quarters, adding potential headwinds. Tech companies in the S&P 500 have so far reported a 47% increase in second-quarter profits compared with the same period a year ago. But analysts expect that growth will slow in each of the next four quarters, according to data compiled by Bloomberg Intelligence.

Jason Benowitz, senior portfolio manager with Roosevelt Investment Group, is skeptical that the streak of tech-stock outperformance can be maintained.

He expects yields to rise as the Fed gets closer to scaling back the monthly purchases of Treasury bonds and mortgage-backed securities that have injected massive amounts of cash into the financial system. He said that would put pressure on the so-called mega-cap tech stocks, which have few other catalysts before the holiday shopping season begins.

“It’s hard to get excited about the world’s biggest technology companies in that backdrop,” he said.

Subscribe now to stay ahead with the most trusted business news source.

29 September, 2022
CUNY to Use $4M in Metropolis Funding for Inexperienced Workforce Packages

CUNY to Use $4M in Metropolis Funding for Inexperienced Workforce Packages

28 September, 2022
Does Your Faculty Actually Want That Expertise? 7 Inquiries to Ask

Does Your Faculty Actually Want That Expertise? 7 Inquiries to Ask